"You should know that Roulin’s child came to them smiling and very healthy, while the parents were at bay. So take it as it is, wait with confidence and possess your soul with a long patience as an old saying has it, and with good will. Let nature take its course." To Theo and Jo van Gogh-Bonger. Saint-Rémy-de-Provence, Saturday, 6 July 1889

As much as Van Gogh liked to paint portraits of people, there were few opportunities for him to pay or arrange for models for his work. He found a bounty in the work of the Roulin family, for which he made several images of each person. In exchange, Van Gogh gave the Roulin’s one painting for each family member.[5]

Van Gogh painted the family of postman Joseph Roulin in the winter of 1888, every member more than once.[7] The family included Joseph Roulin, the postman; his wife, Augustine; and their three children. Van Gogh described the family as “really French, even if they look like Russians.”[8] Over the course of just a few weeks, he painted Augustine and the children several times. The reason for multiple works was partly so that the Roulins could have a painting of each family member, so that with these pictures and others, their bedroom became a virtual “museum of modern art.” The family’s consent to modeling for van Gogh also gave him the opportunity to create more portraits, which was both meaningful and inspirational to van Gogh.[9]

Van Gogh used color for dramatic effect. Each family member’s clothes are done in bold primary colors and van Gogh used contrasting colors in the background to intensify the impact of the work.[4]

Marcelle Roulin, the youngest child (31 July 1888 – 22 February 1980) was four months old, when Van Gogh made her portraits.[10] She was painted three times by herself and twice on her mother’s lap.[7] The three works show the same head and shoulders image of Marcelle with her chubby cheeks and arms against a green background.[21]

When Johanna van Gogh, pregnant at the time, saw the painting, she wrote: “I like to imagine that ours will be just as strong, just as beautiful – and that his uncle will one day paint his portrait!”[7] A version titled Roulin’s Baby resides at the National Gallery of Art in Washington, D.C.[22]

In Philadelphia Museum of Art’s Portrait of Madame Augustine Roulin and Baby Marcelle Augustine holds baby Marcelle who was born in July, 1888. The mother, relaxed and her face in a shadow, is passive. We can see by the size of Augustine’s sloping shoulders, arm, and hands that she worked hard to take care of her family. For instance, there were no modern conveniences like washing machines. In a traditional pose of mothers and new babies, Augustine is holding her baby upright, supporting the baby’s back by her right arm and steadying the baby’s midsection with her left hand. Marcelle, whose face is directed outward, is more active and engages the audience. Van Gogh used heavy outlines in blue around the images of mother and baby.[4]

To symbolize the closeness of mother and baby, he used adjacent colors of the color wheel, green, blue and yellow in this work. The vibrant yellow background greats a warm glow around mother and baby, like a very large halo. Of his use of color, Van Gogh wrote: “instead of trying to reproduce exactly what I have before my eyes, I use color… to express myself more forcibly.” The work contains varying brushstrokes, some straight, some turbulent – which allow us to see the movement of energy “like water in a rushing stream.” Émile Bernard, Van Gogh’s friend, was the initial owner of this painting in its provenance.[4] 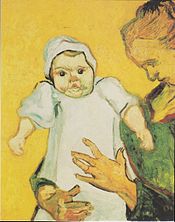 Joseph Roulin was born on 4 April 1841 in Lambesc. His wife, Augustine-Alex Pellicot, was also from Lambesc; they married 31 August 1868.[10] Joseph, 47 years of age at the time of these paintings, was ten years his wife’s senior. Theirs was a working class household.[11] Joseph worked at the railroad station as an entreposeur des postes.

Van Gogh and Joseph Roulin met and became good friends and drinking companions. Van Gogh compared Roulin to Socrates on many occasions; while Roulin was not the most attractive man, van Gogh found him to be “such a good soul and so wise and so full of feeling and so trustful.” Strictly by appearance, Roulin reminded van Gogh of Russian novelist Fyodor Dostoyevsky – the same broad forehead, broad nose, and shape of the beard.[11] Roulin saw van Gogh through the good and the most difficult times, corresponding with his brother, Theo following his rift with Gauguin and being at his side during and following the hospital stay in Arles.[12]

In the very first days of December 1888 Vincent told his brother Theo:

I have made portraits of a whole family, that of the postman whose head I had done previously – the man, his wife, the baby, the young boy, and the son of sixteen, all of them real characters and very French, though they look like Russians. Size 15 canvases. You know how I feel about this, how I feel in my element, and that it consoles me up to a certain point for not being a doctor. I hope to get on with this and to be able to get more careful posing, paid for by portraits. And if I manage to do this whole family better still, at least I shall have done something to my liking and something individual. Just now I am completely swamped with studies, studies, studies, and this will go on for quite a while – it makes such a mess that it breaks my heart, and yet it will provide me with some property when I’m forty.[13]

After her husband had posed for several works with van Gogh, Augustine sat for Van Gogh and Paul Gauguin in the Yellow House the two men shared. During the sitting, she kept her gaze on Gauguin, possibly for reassurance because, according to her daughter, she was not comfortable in the presence of van Gogh. She sat in the corner of the room for the evening sitting. The resulting paintings were quite different, as was typical of the sessions where the artists’ shared the same model. Gauguin’s portrait included as background a picture he recently completed entitled Blue Trees. He painted Augustine in straightforward, literal way.[14]

In comparison, Van Gogh’s work appeared more quickly executed and more thickly painted than that of Gauguin’s painting. Van Gogh admired the work of Dutch masterFrans Hals whose portraits display lively brushwork and the direct, spontaneous style of alla prima, or wet-on-wet . The yellow brushstrokes on the side of her head depict the gaslight. Instead of depicting the evening mood, he painted pots of sprouting bulbs. Van Gogh made a connection to her earthy nature by the depiction of germinating bulbs, essentially declaring her a “human tuber.” Days after working on this painting Van Gogh began painting the remaining Roulin family members, including the four-month-old baby, Marcelle.[14]

In addition to the mother-daughter works where Marcelle is visible, Van Gogh also created several La Berceuse works where Augustine rocked her unseen cradle by a string.[15] Van Gogh labeled the group of work La Berceuse meaning “our lullaby or the woman rocking the cradle.” The color and setting were intended to set the scene of a lullaby, meant to give comfort to “lonely souls.” Van Gogh imagined the painting in several types of settings, such as on an Icelandic fishing boat cabin walls—or the center piece to two Sunflower paintings.[10]

Van Gogh’s works depict a serious young man who at the time the paintings were made had left his parents’ home, working as a blacksmith’s apprentice.[18] The Museum Folkwang work depicts Armand in what are likely his best clothes: an elegant fedora, vivid yellow coat, black waistcoat and tie.[18][19] Armand’s manner seems a bit sad, or perhaps bored by sitting.[19] His figure fills the picture plane giving the impression that he is a confident, masculine young man.[18]

The second work, with his body slightly turned aside and his eyes looking down, appears to be a sad young man.[18] Even the angle of the hat seems to indicate sadness. Both museum paintings were made on large canvas, 65 x 54 cm.[19]

Camille Roulin, the middle child, was born in Lambesc in southern France, on 10 July 1877, and died on 4 June 1922.[10] When his portrait was painted, Camille was eleven years of age. The Van Gogh Museum painting[8] shows Camille’s head and shoulders. Yellow brush strokes behind him are evocative of the sun.[19]

A very similar painting (no image here) resides at the Philadelphia Museum of Art (F537).[20]

In The Schoolboy with Uniform Cap Camille seems to be staring off in space. His arm is over the back of a chair, mouth gaped open, possibly lost in thought. This was the larger of the two works made of Camille.[19]

Jo’s letter1 tells me a very great piece of news this morning, I congratulate you on it, and am very pleased to hear it. I was very touched by your reasoning when you say that as neither of you are in as good health as appears desirable on an occasion like this, you had a kind of doubt, and in any case a feeling of pity for the child to come traversed your soul. This child in this case, has it, even before its birth, been less well loved than the child of very healthy parents, whose first impulse would have been a keen joy? Surely not. We know so little about life that we’re not really in a position to judge between good and bad, just or unjust, and to say that one is unhappy because one suffers hasn’t been proved. You should know that Roulin’s child came to them smiling and very healthy, while the parents were at bay.2 So take it as it is, wait with confidence and possess your soul with a long patience as an old saying has it, and with good will.3 Let nature take its course.”

“On Saturday evening I had a visit from two amateur painters, one of whom is a grocer — and also sells painting materials — and the other a justice of the peace who seems kind and intelligent.”

The grocer was probably Jules Armand, ‘épicier-droguiste’, 30 rue du Quatre-Septembre. Stokvis mentions a Madame J. Armand, the widow of a grocer who was an amateur artist, ‘where Vincent occasionally bought what he needed’. Coquiot calls her ‘the widow of a colourman, where Vincent bought supplies the first few days’, but he doesn’t give a name. See Stokvis 1929, p. 4, and Coquiot 1923, p. 164.
Jules Armand was the first known owner of Marcelle Roulin (F 440 / JH 1639). In the Museon Arlaten in Arles there is a portrait of an Arlésienne, signed ‘J. Armand 1889’. We know from the local newspapers that he regularly exhibited his work in the window of the Bompard fils’ wallpaper shop at 14 place de la République, under the name Armand-Ronin. The official deeds give his name as Jean Auguste Armand; on the electoral roll and in address books it is Jules Armand; Ronin was the maiden name of his wife Joséphine (ACA).
At this time there were two justices of the peace in Arles: Paul Marre for the western canton, and Eugène Giraud for the eastern canton (L’indicateur marseillais 1888). We do not know which of the two was an amateur artist. In May 1888 Van Gogh went to see Giraud about a dispute with his landlord; see letter 609, n. 1.
Van Gogh Letters

Leave your email address and Vincent will write you with a painting and his thoughts...

(Don’t worry, Vincent is busy painting and doesn’t send more than one a week!)

You have Successfully Subscribed!