Big Pine (formerly, Bigpine)[4] is a census-designated place (CDP) in Inyo County, California, United States. Big Pine is located approximately 15 miles (24 km) south-southeast of Bishop,[4] at an elevation of 3,989 feet (1,216 m).[2] The population was 1,756 at the 2010 census, up from 1,350 at the 2000 census. The Big Pine Band of Owens Valley Paiute Shoshone Indians of the Big Pine Reservation operates their tribal headquarters from here.

One of the many streams from the Sierra Nevada in Big Pine
The plaque beneath the young giant sequoia (pictured) at the road junction says it was planted in 1913 to commemorate the opening of Westgaard Pass to auto traffic. North from Westgaard Pass lies the Ancient Bristlecone Pine Forest, home to the oldest trees in the world. To the West, Glacier Lodge Road leads high up Big Pine Creek into the Sierra, to lakes, hiking trails, fishing, and rock climbing underneath the Palisades Range and the Palisade Glacier. 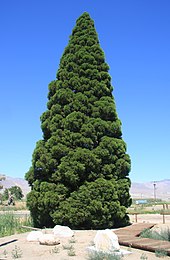 Big Pine’s “big pine”
The Big Pine post office first opened in 1870, closed for a time during 1877, changed its name to Bigpine in 1895, and reverted to Big Pine in 1962.[4] Big Pine has a significant geologic feature (an earthquake scarp) related to the 1872 Lone Pine earthquake. In 1958, the Owens Valley Radio Observatory was established just north of Big Pine. Matt Williams, a professional baseball player and manager, lived there for part of his life. Hollywood character actor Elisha Cook, Jr., known for such classic films as The Maltese Falconand Shane, had a home in Big Pine and died here in 1995.