Twenty Mule Team photo courtesy of:  http://www.owensvalleyhistory.com/death_valley_sketches/page87.html
“Dr. J. K. Suckow was drilling a well for water 4.5 miles (7.2 km) northwest of Boron when he discovered colemanite, a borax ore, in October 1913. After his discovery, mining claims, mostly placer, were staked in the area. The Pacific Coast Borax Company, upon recommendation of its field engineer, Clarence Rasor, acquired many of these claims, including the discovery well. The company then started explorations to determine the extent of the ore body. Suckow continued to have an interest in the area, working prospects east of his discovery well. “In 1924, anxious to repeat his good fortune, Suckow sank a shaft 0.5 miles (0.80 km) mile away from his first, and he struck basalt at 180 feet (55 m). The Pacific Coast Borax Company prospected in the same area, with almost the same results: basalt at 190 feet (58 m). However, persistence paid off. That same year Suckow sank another shaft just a little south of his last one and found a 70-foot (21 m) thick bed of colemanite at 210 feet (64 m). In 1925 the Suckow Chemical Company produced a few hundred tons of colemanite from this shaft. “In the Spring of 1925, William M. Dowsing and J. L. Hannan discovered a huge deposit 120 feet (37 m) thick just 1.5 miles (2.4 km) west of Suckow’s shaft, which they kept a secret until its extent was proven. Sold to the Pacific Coast Borax Company in early 1926, it became known as the Baker Mine. Beginning production in 1927, it yielded a substantial percentage of the borates produced in the Kramer District until 1935. “Production began in December, 1929, at the Suckow Mine, located near the Baker Mine. Suckow Borax Mines Consolidated, Ltd. shared half-interest as tenant in common of the Suckow Mine with Borax Consolidated, Ltd. The two companies became involved in litigation which resulted in the closure of the mine in 1932. It was reopened in 1935 as the West Baker Mine with the Borax Consolidated, Ltd. as owners.[9]” The first post office at Boron opened in 1938.[10] 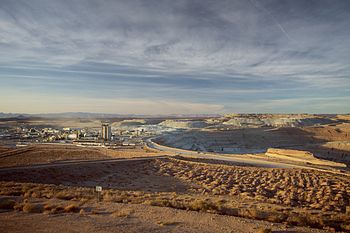 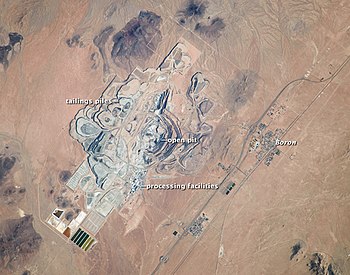 Boron (right center) and the Rio Tinto Borax mine from ISS, 2013
A large borax deposit was discovered in 1925,[11] and the mining town of Boron was established soon thereafter. This borax deposit is now the world’s largest borax mine.[9] It is owned by Rio Tinto Minerals (formerly U.S. Borax). It is operated as an open-pit mine, the largest open-pit mine in California.[12][13] This mine supplies nearly half of the world’s supply of refined borates.[14] Rio Tinto Minerals is Boron’s primary employer, employing over 800 people.[15] Six miles (9.7 km) east of Boron, across the county line in San Bernardino County, is the world’s largest solar power production facility.[16] The Kramer Junction Company (KJC) is the managing general partner of the five 30 megawatt Solar Energy Generating Systems (SEGS) facilities in the Mojave Desert at Kramer Junction, California. Together with its wholly owned subsidiary, KJC Operating Company, KJC operates and manages these facilities (SEGS III-VII).[17] These units generate enough electricity to provide the electrical needs of 30,000 to 40,000 homes without the use of fossil fuels during the day.[18]