https://www.desertusa.com/desert-prospecting/burro-schmidt-tunnel.html   Burro Schmidt’s Tunnel, a strange passageway burrowed through 2,087 feet of solid rock up in Copper Mountain, in the Mojave Desert’s El Paso range.  I was lucky because while I was there, I got a chance to visit with the venerable 88-year-old Evelyn Tonie Seger, a long-time resident at the site, and David Ayers, a helper and caretaker for Seger.  Together, they shed new light for me on the story of the tunnel, the product of a man’s implausible obsession. (Tonie died in 2003. She is buried next to William Henry (Burro) Schmidt. The grave’s headstone is part an old bed frame.)

All William “Burro” Schmidt would ever say about his tunnel, according to Seger and Ayers, was that it was a “shortcut.”  He never really explained why he spent some 33 years of his life digging, single handedly, through a mountain to reach an isolated ledge, over 4,000 feet above sea level.  “Miners don’t talk much,” said Ayers. 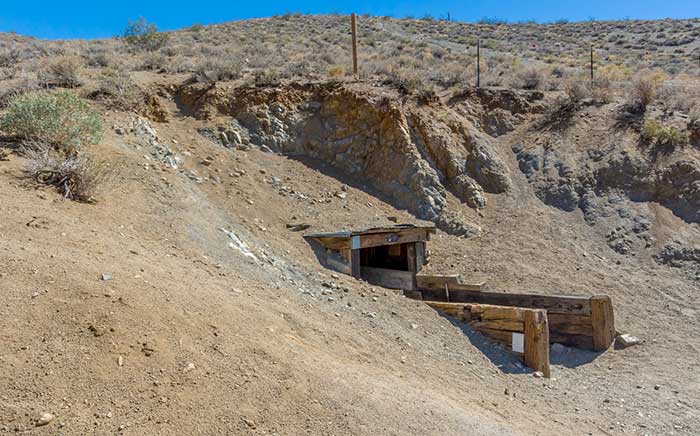 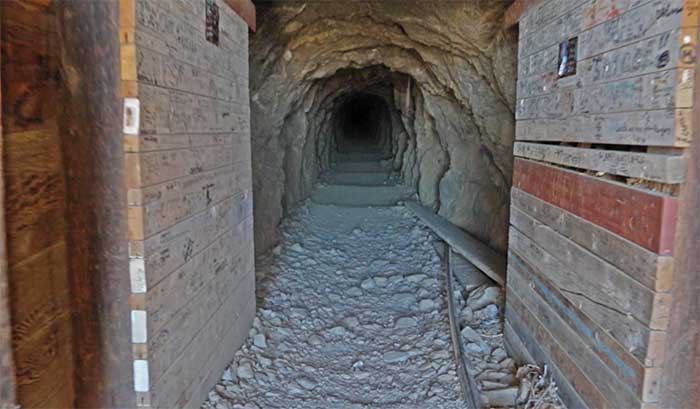 Schmidt used mostly hand tools and explosives in his excavation.  He removed rubble with a wheelbarrow.  Sometimes, he carried it out on his back.  “Later in life, his abdominal muscles were so strong, that they forced him to bend permanently.  It caused him a lot of pain,” said Ayers.  Eventually, Schmidt installed rails for an ore car. Schmidt, hoping to improve his health, had come to the California desert from Rhode Island, where six of his siblings had died from tuberculosis.  He began construction of the tunnel in 1902, near the site where he had staked a mining claim. Ostensibly, he meant to use the tunnel as a short cut through Copper Mountain for carrying his ore to a smelter on the other side.  That seems improbable, however because the tunnel emerged on the high ledge, in the middle of nowhere. 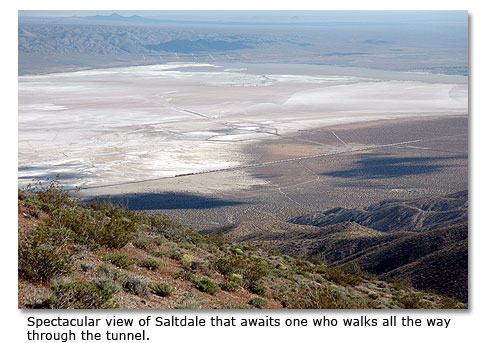 During the years he worked on his tunnel, Schmidt supported himself, not by mining, but by hiring himself out as a ranch hand every summer.  In the fall, he would take his two burros (the source of his nickname), Jack and Jenny, and head back up to Copper Mountain to resume his compulsive excavation of the tunnel. According to a story written by Evelyn Tonie Seger herself, for the Time/Life book Odd And Eccentric People, Schmidt, in the course of digging the tunnel, actually discovered “potentially rich veins of gold, silver, copper, and iron.”  Additionally, Ayers said, there was a rumor about a rich vein of gold in the mountain.  However, “…the miner in [Schmidt] had been upstaged by the tunneler.”  Driven to complete his monumental one-man project, Schmidt simply disdained precious metals.  Even after he had finished his tunnel, he never transported an ounce of ore through it. Later in his life, Schmidt took on a partner, a man named Mike Lee, to assist in taking visitors on tours of the tunnel.  After Schmidt died in 1954, Lee continued to give tours of the tunnel until he, too, died, in 1963. 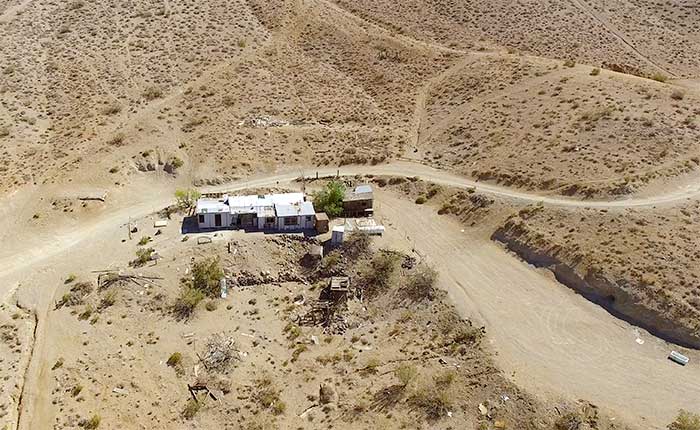 After Lee’s death, Evelyn Tonie Seger and her husband bought the Schmidt and Lee cabins, not far from the tunnel entrance.  Like Schmidt, the couple had been drawn to the California desert by the promise of better health, primarily for Seger’s ailing husband. With few conveniences at the cabins, the Segers had to haul water by truck up the mountainside to their new home.  One day, in 1964, Seger found her husband stricken, sprawled on the ground beside the truck.  As he lay dying, he told her that his last wish was that she locate water for their home.  Now with an obsession of her own, Tonie stayed on at the site until she did, in fact, find water.  I asked her how did a New England native ever found water in the Mojave Desert?  “I witched it!” she said.  She had used a divining rod. So preoccupied was she about finding water that, she said, she didn’t even know about the tunnel until some visitors asked her about it. Becoming a legend in her own right, Evelyn Tonie Seger, feisty and fiercely independent with no time for nonsense, grew as tough as the desert.  Good thing, too.  Finding water, as it turned out, wasn’t her only problem. In the late 1970s, another woman who had a nearby claim tried to run Seger out of the area—apparently a modern attempt at claim jumping.  Several times during that period, the woman and/or members of her family allegedly took pot shots at Seger.  Other times, Seger awoke in the middle of the night to find her buildings on fire.  The feud reached its climax when the other woman turned up at Seger’s cabin one day with a loaded pistol.  Seger knocked the weapon from the woman’s hand.  She told the woman that if she ever came back with a gun, she’d “better be prepared to use it!”  That confrontation led to an uneasy truce that lasted until the other woman died, bringing a permanent end to the dispute. Evelyn Tonie Seger lived at the Copper Mountain site, in one of the larger cabins, until her death, on May 30, 2003, at the age of 95.  Relatives and friends gathered at a memorial to recall the temper and wit that defined her personality and the stories that spoke to her love for the desert, especially the sunrises.

Take a 60 Second Tour of the Tunnel

A Visit to the Tunnel

You can reach Burro Schmidt’s Tunnel and the cabins by driving some nine miles up a dirt road that intersects Highway 14 north of Red Rock Canyon State Park, about 35 miles north of the community of Mojave.  The site is located on federal land, which is administered by the Bureau of Land Management.  To get an update on directions and current road and site conditions, contact the BLM: Bureau of Land Management Ridgecrest Resource Area 300 S. Ridgecrest Road Ridgecrest, California 93555 Phone 1-760-384-5400