Robbers Roost (unincorporated Kern County, California, also known as Robber’s Roost and Bandit Rock) is a rock formation in the foothills of the Scodie Mountains portion of the Southern Sierra Nevada Mountain Range in the North Mojave Desert. The formation overlooks the southern portion of the Indian Wells Valley. The nearest municipality is Ridgecrest, California. The Los Angeles Aqueduct is within several hundred yards of the formation. The area is managed by the Bureau of Land Management. Robbers Roost lies west of Freeman Junction, which is approximately at the intersection of California highways 178 and 14. In the 19th century, outlaws were known to use Robbers Roost to spot stagecoaches moving south towards Los Angeles through the Antelope Valley from the Owens Valley or west through Walker Pass towards the San Joaquin Valley. Modern day Walker Pass is State Route 178. Stagecoaches in this area often carried gold and other valuable gems from the local mines. The jagged rocks were a hideout and camp for Kern County’s most notorious bandit gang, led by Tiburcio Vásquez.  February 23, 1874 he and Clodoveo camped here. 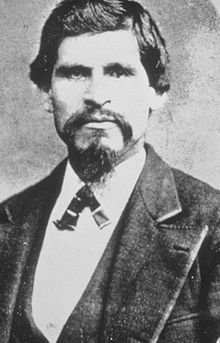 Tiburcio Vásquez
Robbers Roost was listed on the National Register of Historic Places in 1975.[1][2] The following information is based on the National Register of Historic Places Inventory Nomination Form. The massive rock, at an elevation of 4,000 feet, not only provided an excellent view for miles in every direction across the desert landscape, but also provided a ready-made hideout. The many crags, crevisses, and caves gave protection from the severe desert weather, in addition to providing a hiding place. The steep, rugged lookout remains today much in the same condition as it did when Vásquez used it as his hideout.

View from atop Robber’s Roost overlooking the area where Freeman Junction once stood. The town of Ridgecrest, California is visible in the background.
Vásquez conducted several holdups in 1874 at Coyote Holes ([near the] intersection of Highway 178 and 14) before his hanging the following year in San Jose. A Mexican gentleman of adventure, Vásquez reaped a harvest of monetary gains as he rode the mountain, coast, and desert roads. His first appearance upon the desert scene was in the early months of 1874. No early desperado in California banditry rivaled his record except Joaquin Murrieta. Vásquez started his career about the middle of the century, culminating it in 1875. Before coming to the inner regions of California, he had served a number of years in prison. A freeman in 1863, feeling the state owed him a living, he returned to his lawlessness. He joined infamous bandit groups and about 1871 became leader of his own band. Made bold by success, he planned operations in the desert country from which tales were coming of rich mines and wealthy travelers. The vicinity of Cerro Gordo Mines in Inyo County was the goal of the gang. They planned to secure their loot by highway robbery: money and jewels were easier to get away with than heavy bullion. Vásquez made his first appearance at Coyote Holes, a stage station where the Walker Pass road met the freight road to Los Angeles. The site of Vásquez’s local camp was in the craggy peaks south of Coyote Holes station. From that day on, this jagged rock easily seen from Highway 14 has been known as Robbers Roost. Vásquez and his gang continued to operate along the highways until army detachments from camp Independence made an effort to capture them. This discouraged Vásquez and he left the desert region and returned to the Los Angeles area. The bandit was finally captured there and returned to San Jose where he was tried for murder, convicted, and hanged on March 19, 1875. He had made an enemy of one of his friends by finding favor with the man’s niece. The uncle was responsible for advising the law enforcement officers of his whereabouts. The California desert has known many other bandits but Vásquez and his gang were the most notorious. Robber’s Roost is closed from February 1 through July 1 to allow solitude for bird of prey nesting.   Freeman Junction, a ghost town in Kern County, California, USA, was first homesteaded in the 1920s by Clare C. Miley, who was born in 1900. By the 1930s a restaurant, gas station and mining activities dominated the site. By June 1976 the town had died and the remains of the town have been removed by passersby. Bedrock mortars near the original spring suggest that this area was regularly used as a campsite by Native Americans. In 1834 explorer Joseph R. Walker passed this junction of Indian trails after crossing the Sierra Nevada via Walker Pass. In the winter of 1849-50, forty-niner parties, en route to the California gold fields, passed through here after escaping from Death Valley. In 1873 or early 1874, Freeman S. Raymond, an original forty-niner, bought or built a stagecoach station here, at the junction of the Walker Pass road (the route of modern California 178) and the road to Los Angeles (now replaced by California State Route 14). Both roads carried traffic to and from the mines then in the area. The Walker Pass road led to the Kern River mines, while the Los Angeles road continued further north and east to the mines at Cerro Gordo, the Panamints, and later Darwin and Bodie, California. On February 25, 1874, Tiburcio Vasquez and his associates robbed several freight wagon crews at Raymond’s station (then called Coyote Holes). They had apparently scouted the location from a nearby rock formation, now known as Robber’s Roost. Vasquez’s group also ambushed and robbed an arriving stagecoach before making their escape. One of the robbery victims was shot in the leg. Raymond continued operating the stagecoach stop, which after 1889 or 1890 included a post office, until his death in August, 1909. The station burned down a few years later. The Los Angeles Aqueduct now passes through the site. 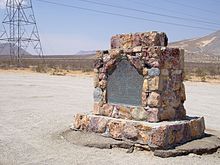