An Indian Wells California Historical Landmark was erected near the Indian Wells Lodge, 4.9 miles north of Freeman Junction on Highway 14 where William L. Manly found water after his group left Death Valley. This marker was placed by California Centennials Commission in cooperation with Kern County Historical Society and dedicated on July 9, 1950. The inscription on the plaque reads: Indian water hole on Joseph R. Walker trail of 1834 where Manly-Jayhawker parties of 1849 found their first water after five days of travel from Argus Range. During 1860’s was site of stage and freight station from Los Angeles to Coso and Cerro Gordo mines. This site is California Historical Landmark #457.   South of present-day Provo, Utah, Manly joined other Forty-niners traveling to southern California. In December, these pioneers became lost in the Great Basin Desert, and entered Death Valley having followed an inaccurate map for three weeks. Their food supplies were almost exhausted, and the oxen pulling their wagons were dying of starvation. Manly, with his associate John Haney Rogers, trekked 250 miles on foot across the Mojave Desert to Rancho San Fernando near Los Angeles, California, to scout an evacuation route for the families trapped in Death Valley, and procure food and horses if a settlement could be located.[3]

Manly worked the gold fields for several months, then returned to his farm in Wisconsin via steamboat, crossing the isthmus of Panama overland. In 1851, Manly returned to California by the same method, arriving in San Franciscoshortly after the fire of 1851 and continued in the goldfields until the fall of 1859, by which time he had saved enough money to buy land 250 acres (1.0 km2) south of San Jose, paying $16 an acre, $4,000 in all, where he planted a farm. In 1862, at the age of 42, Manly married Mary Jane Woods[4] of Lodi, California. 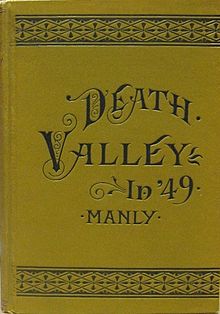 Death Valley in ’49 (1894)
Manly wrote his first manuscript, referencing his diary (or notes) in early 1851 after returning east. He had it sent it to his parents to keep for him, but it burned in their farmhouse shortly thereafter. Upon learning this, he decided to put the traumatic past events behind him, and stopped keeping his diary. Thirty years later, his friends finally convinced him to recount his memories. By this time, his diary was “lost” (probably also burned, possibly purposely) but he recreated events from memory and in 1886, Manly published “From Vermont to California” in Santa Clara Valley, a monthly agricultural review.[5] In the compilation of his memories, Manly contacted all the relevant persons possible, then with the aid of a publishing assistant wrote the greater part of his autobiography, The Death Valley in ’49 , published as a book in 1894, at San Jose from Pacific Tree and Vine Company. The title was changed to Death Valley in ’49, ostensibly to encourage sales, although Death Valley is only spoken of in the tenth chapter. Manly recounts in the book how, as the Bennett and Arcane families began their climb out of the valley through the Panamint mountains south of Telescope Peak, someone in the group, probably Sarah Ann Bennett (née Dilley), or Mrs. J.B. Arcane, turned to take a last look eastward and said “Goodbye, Death Valley!”. Only one of the emigrants, a Capt. Culverwell, had died within the confines of the valley itself, while two other people, who Manly remembers in his book as Mr. Fish and Mr. Isham, were found dead along the trail west of the Panamint Range by Manly and his partner John Haney Rogers. Fish and Isham were members of another group of emigrants who called themselves the Jayhawkers, who had been traveling alongside the Bennett–Arcane Party from Salt Lake, Utah. The Jayhawkers had left the Bennetts sometime in the second or third week of December 1849 and walked out of Death Valley, after butchering the last of their oxen for jerky, along a path north of Telescope Peak, perhaps through the pass north of Tucki Mountain that today carries State Route 190 from Olancha to Stovepipe Wells. This pass is today known as Towne Pass, after Captain Towne, the leader of “The Mississippi Boys” group of the 1849 Death Valley pioneers. NOTES: J. B. Arcane was possibly an emigrant from the Basque region of France; if so, the correct spelling of his name would be “Arcan”. The first names of many of the 1849 Death Valley Pioneers, including Captain Culverwell, Mr. Fish, Mr. Isham, and Captain Towne, are lost to history. http://www.mojavered.com/indian-wells-lodge/ Most of us know that Capt. Freemont, Kit Carson and their topographer, Edward Kern (for whom our county is named), led the party that scouted our area ahead of the pioneers, But did you know that a group of fortune hunters heading for the Sacramento gold fields in 1849 took a shortcut branching off from the Santa Fe trail, got lost and ended up right here? One wagon train of over 100 wagons set out from St. Louis for the gold rush in Sacramento. THe wagon master was a responsible former military Captain named Benjamin Hunter. Capt Hunter’s wagon train crossed paths with mineral traders heading east on the trail just out of Santa Fe, New Mexico. One of the traders had a crude map and rough details of a shortcut across the deserts to Sacramento. After much heated debate and argument thirty-five of the wagons, believing they could shave nearly six months off their long journey, elected to leave Capt. Hunter’s train. Several weeks later, those 35 wagons were hopelessly lost in the middle of Death Valley. Among the wagons were two groups of bachelors from the Kansas territory known as the Manly Party and the Jayhawkers. With supplies gone, no food and little water, the wagons with families were unable to move. The manly party and the jayhawkers decided to unite in search of an Indian water hole mentioned by the mineral traders. The Manly-Jayhawker party used what little water remained to make it over the Argus Range. Out of either unshakable belief in the crude map (that had already led them into one disaster) or just out of sheer desperation, they traveled for five days, crossing our valley and finally reaching the water hole – a natural spring that exists to this day. Indian Wells Lodge Restaurant is located at this historic spring, marked by a California State Monument that relates the Manly-Jayhawkers’ struggle for survival. You can sample the same water that saved the lost wagon train simply by lifting your lips to any glass served at the Indian Wells Lodge Restaurant, the same water that saved the Death Valley party in 1849.