Geology:  Geologic Map of Lancaster, CA       http://avhistorical.org/ANTELOPE_VALLEY_HISTORY.html   The area where Lancaster is now located, known as the Antelope Valley, was originally home to the Paiute Indians. Lancaster’s origins as a settlement start with the Southern Pacific Railroad, which is believed to first use the name Lancaster, where a station house, locomotive watering facilities and section gang housing were built when the railroad laid track through the town’s future location. In 1876 the Southern Pacific completed the line through the Antelope Valley,[9] linking San Francisco and Los Angeles. The origin of Lancaster’s name is unclear, attributed variously to the surname of a railroad station clerk, the moniker given by railroad officials, or the former Pennsylvania home (Lancaster, Pennsylvania) of unknown settlers. Train service brought passengers through the water-stop-turned-community, which, with the help of promotional literature, attracted new settlers. The person credited with formally developing the town is Moses Langley Wicks, who in 1884 bought property from the railroad for $2.50 per acre, mapped out a town with streets and lots, and by September was advertising 160-acre tracts of land for $6 an acre. The following year, the Lancaster News started publication, making it the first weekly newspaper in the Antelope Valley. By 1890, Lancaster was bustling and booming, and thanks to adequate rainfall, farmers planted and sold thousands of acres of wheat and barley. 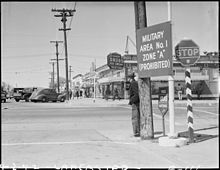 A sign designating the military zone of Lancaster, 1942
The town was devastated by the decade-long drought that began in 1894, killing businesses and driving cattle north, though fortunes improved somewhat in 1898 following the nearby discoveries of gold and borax, the latter to become a widespread industrial chemical and household cleaner. Thanks to the five-year construction of the 233-mile Los Angeles Aqueduct starting in 1908, Lancaster became a boom town by housing aqueduct workers. The 1912 completion of Antelope Valley Union High School allowed students from the growing region to study locally instead of moving to distant cities, and the school boasted the state’s first dormitory system to accommodate students from outlying districts. The community began a steady growth spurt in the 1930s, starting with construction of Muroc Air Force Base, site of frequent flight tests, including the “breaking” of the sound barrier by Chuck Yeager in a Bell X-1A in 1947. in the 1980s through the end of the program, Edwards Air Force Base, by then renamed, hosted a limited number of landings of the Space Shuttle. The development of Air Force Plant 42 in 1958, augmented in the 1960s by construction of Lockheed Aircraft’s Plant 10, created tens of thousands of jobs. High-wage employment hit its peak in the 1970s during the Lockheed L-1011 commercial wide body jetliner project, for which all assembly and some engineering and parts production were performed. 250 L-1011 aircraft were assembled and flown from this plant and airfield. Lancaster was an unincorporated community in Los Angeles County until 1977, when it was incorporated as a city, with Arnold Rodio serving as its first mayor. Lancaster State Prison opened in 1993 and before that Los Angeles County hosted no prisons but accounted for forty percent of California’s state-prison inmates.[10] “Most of Lancaster’s civic leaders and residents” opposed the building of the prison, and four inmates escaped from LAC in its first year of operation.[11] Nevertheless, by 2000 a proposal to increase the proportion of maximum-security inmates received little criticism.[11] In 2005, Hyundai Motor Co. announced the grand opening of a 4,300-acre, $60 million “Proving Ground,” a state-of-the-art testing facility for cars and sports utility vehicles in nearby California City. Lancaster is now home to major defense contractors such as Boeing, Northrop Grumman, Lockheed Martin, BAE, and government agencies, such as the NASA Dryden Flight Research Center, which are all active in design, testing, and manufacturing of a variety of military and commercial equipment. Notable projects assembled and/or designed there include the Space Shuttle orbiters, B-1 Lancer bomber, B-2 Spirit bomber, F-117 Nighthawk fighter, F-35 Joint Strike Fighter, and the Lockheed L-1011 TriStar, a wide body passenger jet aircraft. The region is also proximate to the Mojave Air & Space Port, which is famous as the base of operations for Virgin Galactic and Scaled Composites, the company that designed SpaceShipOne and won the X-Prize. In 2010, the city opened The BLVD, a one-mile revitalized stretch of Lancaster Boulevard between 10th Street West and Sierra Highway.[12] City leaders have set the ambitious goal of becoming the nation’s first Net-Zero municipality, wherein they will produce more clean energy than they consume. Much of the city’s infrastructure including City Hall, local schools, and even their minor league baseball stadium are solar powered. In March 2013, Lancaster became the first city in the US to require solar panels on all new homes in an effort to make the community more carbon neutral. The rule took effect in January, 2014.[13]

War Eagle Field is a former airfield located in the Mojave Desert, about 5 mi (8.0 km) west of central Lancaster. Polaris Flight Academy, which opened on the field’s grounds on July 15, 1941, trained cadets for the Royal Air Force and the Royal Canadian Air Force. (The school also used two auxiliary fields, Liberty Field and Victory Field.) The airfield had two hard-surfaced bituminous runways, one of 3,100′ aligned NE/SW (05/23) the other of 2,950′ aligned E/W (09/27). After the Japanese attack of Pearl Harbor, the flight school began training cadets for the United States Army Air Force on 28 July 1942, being operated by the Polaris Flight Academy as a contract basic flying school (phase 1). The primary trainer in use was the BT-13 Valiant. In 1944, the flight school changed its name to Mira Loma Flight Academy. The airfield inactivated on 1 October 1945, and was declared surplus in 1946. Responsibility for it was given to the War Assets Administration. The land was then bought by Los Angeles County. The airfield was converted to Mira Loma Detention Center. In 2012, LA County closed the detention center.[14] LA County is currently collaborating with the City of Lancaster, the faith-based community, and the non-profit community to convert the facility into a winter shelter.[15] Many wartime buildings, including two still intact hangars are still in use. On the roof of one of the hangars, the name “War Eagle” is still faintly perceptible. Flight operations continue at the airfield with a helicopter pad, used by the Los Angeles Sheriff’s Department.

According to the United States Census Bureau, the city has a total area of 94.5 square miles (245 km2), of which, 94.3 square miles (244 km2) of it is land and 0.3 square miles (0.78 km2) of it (0.29%) is water. Lancaster’s elevation is 2,350 feet (720 m) above sea level on a high, flat valley surrounded by pristine mountain ranges. Because the elevation is in the range of 2000 to 3,000 feet (600–900 m) above sea level, the area, like the other parts of the Mojave Desert region, is alternatively referred to as the High Desert. Some cities and communities within the trading area of Lancaster include Palmdale, Rosamond, Lake Los Angeles, Quartz Hill, Ridgecrest, and Santa Clarita. Residents of these desert cities and unincorporated communities share Sierra Highway, Angeles Forest Highway, Angeles Crest Highway (State Route 2), and the Antelope Valley Freeway (State Route 14) for commutes to the San Fernando Valley and Los Angeles Basin.