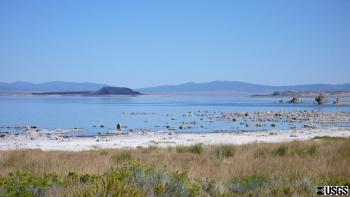 Mono Lake from the Mono Visitor Center (west shore). Negit island is in the middle left and the north part of Paoha is on the right.

Mono Lake is the saline remnant of a much larger Pleistocene fresh-water lake known as Lake Russell. The water is currently about twice the salinity of ocean water. In the middle of Mono Lake are two islands, Negit and Paoha, where the most recent volcanic eruption in the area occurred about 300 years ago. The famous tufa towers are on the south shore. Negit and Paoha were formed by volcanic activity. The light colored section of Paoha is actually lake bottom mud that was pushed up by magma that rose beneath them sometime after AD 1720 (Bailey, 1989). Similar ground deformation (uplift and subsidence) occurs within the caldera and is monitored by the California Volcano Observatory. The darker area on Paoha was erupted about 300 years ago. The dark hat-shaped island, Negit, was formed by an earlier eruption – the hat part is the dome. All of the darker colored volcanic materials on the islands are dacitic and rhyolitic (high silica) lava domesand flows that range in age from about 2000 to about 300 years ago (Stine, 1990). 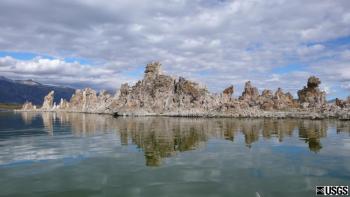 Mono Lake’s tufa towers seen from the south shore.
Lake Russell was once a large lake with shorelines high along the surrounding mountains. The highest remnant shoreline, called a strandline, can be seen along the steep slope west of Mono Lake at 2,188 m (7,180 ft), 143 m (471 ft) above the Mono Lake Visitor Center (Putnam, 1950). In 1941 the surface elevation of Mono Lake was 1,956 m (6,417 ft) before water was diverted to Los Angeles. When water was diverted, the lake level fell and a land bridge provided access to Negit Island. Coyotes used the land bridge to invade seagull nesting sites. The historic low for the lake level was 1,942 m (6,372) ft in 1982 (see http://www.monolake.org/today/water for current and historic lake levels). In 1994 the state of California Water Resources Board modified the city of Los Angeles’s water diversion licenses and the water began to rise again. In mid 2009, the water elevation stands about 1945 m (6,382 ft) and the land bridge is once again under water.

Mono Lake with bubbles from a fresh-water spring surrounding a new tufa tower.
The delicate white tufa towers along the shore of Mono Lake are calcareous (calcium carbonate) deposits formed where fresh-water springs percolate through lake-bottom sediments and saline lake water. Calcium in the fresh water combines with carbonate in the saline lake water. The resulting mixed water is saturated with calcium carbonate and the calcium carbonate precipitates (a solid forms due to a chemical reaction), possibly catalyzed by algae, as the minerals calcite or aragonite. The tufa towers formed entirely underwater and have been exposed due to the decline in lake level. New tufa towers continue to form today. Bubbles rising from fresh-water springs indicate where new tufa is being formed (the circular wave patterns in the image were created by the bubbles rising to the surface). Numerous signs along the well-marked trail through the tufa towers and along the lake shore describe the many fascinating and unique features of the Mono Lake habitat, including its brine shrimp, brine flies, bird life, and Indian and early settlement history. The Mono Lake Marina and the Lee Vining Gas Station Scenic Viewpoint provide additional views of Mono Lake. The Mono Lake Visitor Center includes interpretive information about the area in addition to views.

Bailey, R.A., 1989, Geologic map of Long Valley caldera, Mono-Inyo Craters volcanic chain, and vicinity, Mono County, California. U.S. Geological Survey Miscellaneous Investigations Map I-1933, scale 1:62,500.Putnam, W.C., 1950, Moraine and shoreline relationships at Mono Lake, California: Geological Society of America Bulletin, v. 61, no. 2, p. 115-122. Stine, Scott, 1990, Late Holocene fluctuations of Mono Lake, eastern California, Palaeogeography, Palaeoclimatology, Palaeoecology, 78: 333-381   Volcanic History Evidence of Recent Eruptions …there is a range of volcanic cones that attract the eye, not only on account of their height and the symmetry of their curving slopes of light gray lapilli, but also because they form so striking an exception to the prevailing mountain forms in view. These are the Mono Craters. So perfect are their shapes and so fresh is their appearance that the eye lingers about their summits in half expectation of seeing wreaths of vapor or the lurid light of molten lava ascending from their throats. Israel C. Russell 19th century geologist VOLCANOVILLE The Negit Islands volcanic complex is less than 2000 years old.Except for the Sierra Nevada immediately to the west, Mono Lake is surrounded by a volcanic landscape. The Bodie Hills to the north and the Cowtrack Mountains to the East of the lake do not look much like volcanoes today, but they are remnants of an earlier volcanic era that predated the existence of Mono Lake hundreds of thousands to millions of years ago. The Mono Craters, stretching to the south of Mono erupted recently in geologic time and are the some of the more obvious volcanic features at Mono Lake along with Black Point and the Negit Island volcanoes. THE MONO CRATERS The Mono CratersThis volcanic chain stretching ten miles north to south and topping 9,000 ft. may be the youngest volcanic mountain range in North America. The last eruption in the Mono Craters chain occurred less than 700 years ago at Panum Crater. Panum Crater, located just above the south shore of Mono Lake, is not a true crater. It is more accurately a plug-dome volcano, where cooled lava has created a massive dome-like structure that now “plugs” the volcanic vent at the bottom of the crater. The entire Mono Craters chain is actually a series of plug dome volcanoes that erupted into existence within the last 40,000 years. Odds are the Mono Craters will erupt again. A RARE EVENT Imagine a volcanic eruption 2,500 times greater than the Mt. St. Helens blast of 1980! Twenty miles south of present-day Mono lies the northern edge of Long Valley Caldera. Seven hundred sixty thousand years ago the Long Valley eruption blasted more than 150 cubic miles of earth and ash skyward, burying much of the region in hundreds of feet of volcanic debris. Ash fell as far east as Nebraska. The earth’s surface collapsed more than one mile deep following the eruption, forming a 200 square mile depression, called Long Valley Caldera. Today, Long Valley Caldera is part of a large volcanic complex that stretches from Mammoth Mountain to Mono Lake. Click here to go to the USGS Long Valley Observatory. AN ANCIENT LAKE Magma pushed lake bottom sediments above the surface of Mono Lake approximately 340 years ago forming the large gray island, Paoha.Geologists have determined the age of Mono Lake from the Long Valley eruption. In 1908, oil prospectors, drilling for oil on Paoha Island, discovered an ash layer from the Long Valley eruption beneath hundreds of feet of lake sediment. Beyond the ash layer was more lake sediment. The unlucky prospectors did not find oil, but they did inadvertently discover the secret to Mono Lake’s age. Geologists determined that Mono Lake has held water since the Long Valley eruption 760,000 years ago, and lake sediments below the ash layer hint that Mono Lake could be much older, among the oldest lakes in North America. Click here to see a USGS gallery of Mono Basin volcanic images.