Point Cabrillo, the sandstone headland on which the Point Cabrillo Light lies, was named in 1870 by the United States Geological Survey after the Portuguese explorer João Rodrigues Cabrilho, although Cabrillo’s voyage of exploration on behalf of Spain along the California coast did not reach as far north as the point. Because Spain controlled early California, the Spanish derivation of his name is the one used today. The opium-trading brig Frolic wrecked on a reef north of Point Cabrillo in 1850; the investigation of the wreck by agents of Henry Meiggs led to the discovery of the coast redwood forests of the Mendocino area and the beginning of the timber trade that would drive the local economy for decades.[5][7] 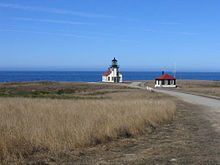 A farther view of the lighthouse
In 1873, Point Cabrillo was surveyed as a potential site for a lighthouse; however, no lighthouse was built at that time. By 1904, several shipwrecks later, the U.S. Lighthouse Service recommended that a lighthouse be placed at the point. The bill to fund its construction, Senate Bill 6648, passed in June 1906, and the government bought 30 acres of land on Point Cabrillo from rancher David Gordon for $3,195. The lighthouse was constructed by the Lindgren Company beginning in 1908, and began operation in 1909. Its first light keeper was Wilhelm Baumgartner, who held the position until 1923. In 1935, an air diaphone supertyfone sound signal was installed.[5] The United States Coast Guard took over the Lighthouse Service in 1939. The lighthouse building took major damage in 1960 after a storm caused waves that crested above the light and flooded the building with mud, but the lens remained undamaged. Later during the Cold War, the station was used to simulate a Soviet radar base in training exercises. The Coast Guard manned the station until 1973, when the lens was covered and a modern rotating beacon was mounted on a metal stand on the roof west of the lantern room.[5] In 1988 the California Coastal Conservancy began buying the land surrounding the light station, and in 1991 the station was added to the National Register of Historic Places. However, the California State Park System declined to take over the land at that time because of state budget shortfalls; instead, the station was managed for nine years by a non-profit organization, the North Coast Interpretive Association. Beginning in 1996, the NCIA organized a major restoration of the station to the state it would have been in the 1930s, after it was electrified, including a return to active duty of the main lens of the light. In 1999, the original third-order Fresnel lens was reinstalled after being upgraded to meet more modern standards. Before it could be used the light had to be as reliable as a Directional Code Beacon, which is commonly used at airports.[2] The restored lighthouse was opened to the public in August 2001, and used in filming the Warner Bros. 2001 drama film The Majestic. In 2002, California State Parks purchased the light station for four million dollars. The NCIA, which then became the Point Cabrillo Light Keeper Association, continued to run the station for the state park system.[5] The station won the Governor’s Historic Preservation Award in 2007,[8] and the Preservation Design Award of the California Preservation Foundation in the same year.[9] A hiking trail, part of the California Coastal Trail, was established in 2011 and connects the light station to Caspar Headlands State Beach one mile to the north, passing Frolic Cove along the way.[10]   The Wreck of the Frolic
FORT BRAGG, Calif. — For the first time since the 1850 wreck of the Frolic was discovered on the rugged Mendocino County coast south of here, archeologists are seeking help from private divers who over the years have collected artifacts from the cargo-laden vessel. At least three collectors came forward recently to share their finds with state and university archeologists working out of the century-old lighthouse keeper’s house at the Point Cabrillo Preserve, a state park only a few hundred yards from the wreck site. Meanwhile, as part of a two-week field study, a group of college students who are also divers probed the wreck site recently to update the position, condition and dimensions of the remains of the 209-ton clipper ship that once ran opium from India to China. No questions were asked of the sport divers who brought in their artifacts from the wreck, said Jim Kimbrell, executive director of the Point Cabrillo Lightkeepers Assn. Instead, they were given a letter certifying the authenticity of their discoveries, which some day may lead to their being donated to the Frolic Repository at the Mendocino County Museum in Willits, the county seat.

“Everybody in town has a big collection and neighbors around the cove have piles of artifacts [from the Frolic] in their garages,” Kimbrell said. “These people will eventually pass away and many of these items will probably end up in garage sales or be thrown away. “The idea of the letters is to let people know the importance of these items so they can be recovered and hopefully donated” to the museum after the collector dies, he said. The sleek 97-foot Frolic, built in Baltimore in 1845 for the lucrative opium trade, was en route from Hong Kong, her hold packed with a dazzling variety of merchandise from China. Her destination was San Francisco, about 100 miles south of the wreck site. But on the evening of July 25, 1850, the ship ran aground on submerged rocks, tearing a hole in her hull and snapping off the rudder, according to a report by the Frolic’s captain, Edward Horatio Faucon. Minutes later, the crew managed to careen the sinking vessel into a tiny cove where it came to rest in water 10 to 35 feet deep. The cargo manifest listed ornately carved camphor trunks, fine silks, tables with inlaid marble tops, even a prefabricated two-room house with oyster-shell windows, Kimbrell said. There was also gold filigree jewelry, mother-of-pearl gambling pieces, ivory napkin rings and 6,109 bottles of Edinburgh ale, which had already traveled two-thirds of the way around the globe from the British Isles via India, according to Thomas Layton, a professor of anthropology at San Jose State. Although only three groups of divers brought in artifacts last weekend, there were some surprises, Kimbrell said. One was an unusual unbroken porcelain plate, similar in style to ones still made in China. Another diver brought in a square porthole with its glass still intact, one of only three recovered from the wreck. A husband-and-wife dive team also showed off a shard from a delicate Chinese vase and a piece of porcelain with designs not seen before, he said. “It’s an extremely important wreck from the earliest time of the Gold Rush,” said Sheli Smith, an adjunct instructor at Napa Valley College and Frolic survey project director. The cargo was a mixture of the luxurious and the utilitarian, “very important to understanding the dynamic of the time.” Although it’s been illegal to remove items from wrecks along the California coast since 1959, recreational and sport divers have pulled thousands of items from the wreck since its discovery in the early 1960s, said Layton, who has written two books on the ship and her last voyage. Today the wreck and all others in coastal water are protected under a 1998 federal law. A 1990 California law protects abandoned shipwrecks under the jurisdiction of the State Lands Commission.

A display of recovered items in a small museum at the Point Cabrillo lighthouse includes a six-pound cannon, antique firearms, coins and other valuables. Ironically, many would have been lost were it not for the efforts of divers who made their discoveries while hunting abalone and other marine creatures, researchers said. Support for the archeological field study that ended Aug. 6 came from the state parks system and the Point Cabrillo Lightkeepers Assn., which operates and maintains the lighthouse in conjunction with the Coast Guard. The researchers were in agreement that a remarkably well-preserved, European-made leather shoe was the most interesting object that had been retrieved recently from the shipwreck. “What makes it more exciting is that it belonged to one of the officers on the Frolic,” Smith said as she delicately handled the artifact. “The last time someone saw this shoe was on July 25, 1850.”
Faucon, his two officers and 20 members of the crew escaped in two lifeboats, but six crewmen stayed in the rigging of the foundering ship, according to the captain’s report, and were presumed lost. The survivors rowed six miles south to the mouth of what is now called the Big River. Most of the crew at that point elected to travel by land, since one of the open boats leaked badly. But Faucon, the officers, four oarsmen and a sick Malay sailor made the arduous 70-mile journey by sea to Bodega, in what is now southern Sonoma County. The fate of the rest of the crew who headed off into the then-unexplored Mendocino forest remains a mystery. The Frolic’s cargo was said to be worth $150,000, which would be a fortune in today’s dollars, Layton said. The wreck also led to the opening of the North Coast to exploration by settlers, making it a significant event in the state’s history, according to Layton’s research.

When Faucon reached San Francisco with his exhausted men, an account of the shipwreck and their perilous voyage south in an open boat appeared the next day in the Daily Alta Californian. In the spring of 1851, Henry Meiggs, a San Francisco lumber merchant, financed a land expedition up the unexplored coast in hopes of salvaging the Frolic’s valuable cargo. The explorers found no trace of the ship or its treasure, although they reported encountering local Pomo Indian women wearing fine Chinese silk shawls. But at the mouth of the Big River, the expedition found huge groves of redwoods. Upon hearing this, Meiggs ordered a sawmill from the East Coast and installed it on an ocean bluff he called Meiggsville. It was, Layton said, the beginning of the North Coast logging industry that continues today. The village of Meiggsville, the first on the coast, was later renamed Mendocino.