Randsburg (formerly, Rand Camp)[5] is a census-designated place (CDP) in Kern County, California, United States. Randsburg is located 17 miles (27 km) south of Ridgecrest,[5]at an elevation of 3,504 feet (1,068 m).[4] The population was 69 at the 2010 census, down from 77 at the 2000 census.  Randsburg is on the west side of U.S. Route 395 in the Rand Mountains, and is separated by a ridge from the neighboring community of Johannesburg. 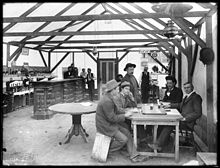 Inside the Yellow Aster Saloon, Randsburg, California, ca.1900
The card game being played in the photograph is known as Faro. Faro was very popular from 1860 to about 1960. The last game of Faro vanished from Las Vegas from The Dunes hotel casino in about 1980. Gold was discovered at Rand Mine near the site in 1895 and a mining camp quickly formed, and was named Rand Camp, both mine and camp were named after the gold mining region in South Africa.[5] The first post office at Randsburg opened in 1896.[5] This living ghost town has an influx of tourism throughout the year. The most visitors arrive between Fall and Spring due to the extreme heat of the summer. The season kicks off with the annual Western Days Celebration the third weekend of September. Events such as gun fights, panning for gold, live bands, dancing girls, food and vendors bring the town to life. During Thanksgiving, as well as New Year’s Day weekend, the town is flooded by off road enthusiasts, most ride into town on motorcycles and other off-road vehicles. The main drag is a legal trail. Many, including tourists frequent the General Store/ice cream parlor. Famous for their 1904 soda fountain and “Black Bart” banana split.Other attractions include the White House Saloon, The White Butterfly Giftshop, A Hotel gift shop,the Rand Desert Museum, the turn of the century Haunted Barbershop, Yohos unusual gifts and candies, Fasigs Antiques, the always open Jailhouse, and many unusual historical buildings. There are artists and galleries. Truly a unique spot, boasting 38 year round residents. Echoes of the past California Gold Rush.Photographers dream. Best time to visit: Saturday and Sunday. Weekdays many are closed. Johannesburg is located 1 mile (1.6 km) east-northeast of Randsburg,[5] at an elevation of 3517 feet (1072 m).[4] The terminus of the Randsburg Railway was here from 1897 to 1933. The population was 172 at the 2010 census, down from 176 at the 2000 census. Johannesburg is divided from the neighboring community of Randsburg by a ridge. The town is frequently referred to as “Jo-burg” by locals and frequent visitors to the northwest Mojave. Johannesburg was founded to support mining operation at Randsburg. In addition to providing rail access, the region’s first wells were operated by companies located in Johannesburg. During the first half of the 20th Century, the Rand Mining District was the principal gold producing region of California. Activity centered on the Yellow Aster Mine, discovered in 1894. In 1919, the Rand Silver Mine was discovered east of town on Red Mountain. The Rand Mine produced more silver than any mine in California. Johannesburg was named by miners who had previously worked in the gold-producing region of South Africa. Containing the city of Johannesburg, South Africa, this region is in the Witwatersrand, and is frequently referred to as “the Rand.” The first post office at Johannesburg opened in 1897.[5]   Photos courtesy of:  Death Valley Jim – one of the best online sources for all things Death Valley!